9/18/2018
It’s common to say that “Everything I Know in life, I Learned in Kindergarten.” At Saint Andrew’s School, this saying rings particularly true about the school’s very own distinguished Pre-K & Kindergarten program.
Finland is widely known as a world leader in early childhood education. What does Saint Andrew’s have in common with Finland? It has to do with what makes the early childhood program so successful. Both successes are attributed to the concept of coherence.
Kids in Finland are universally channeled into a program for children at four and five years old - a program designed to align with what they’re going to learn later in school. Saint Andrew’s Pre-K and Kindergarten learning objectives are also aligned with those seen in the Elementary years, grades 1-5.
One measure of the alignment between the early years and elementary grades is seen in the Buddy Program. The hallmark of this program is the ongoing relationship that is built between four and five-year-olds and grade 5 students. Grade 5 students come into Pre-K and Kindergarten classes at the beginning of each day and work with their younger counterparts one-on-one. “The benefits of this program are multifaceted. Our little ones look up to and try to emulate the character and intelligence of grade 5 students,” said Angela Kopels, Head of the Lower School. “Grade 5 students also benefit in that they develop leadership skills.”
The school’s early childhood years set students up in a spiral of success as youngest Scots begin learning using programs such as the International Baccalaureate Programme (IB/PYP), Singapore Math, and Teachers College Reading and Writing Project

Just ask Shanna Bober, senior and lifer at SA. “Kindergarten is special at Saint Andrew's because you are with a group of friends that you will be with for the rest of your years at the school.” Skills Shanna learned in Kindergarten have stayed with her for 13 years. But it’s more than just reading, writing, and arithmetic for this senior Scot. “Because I started here in Kindergarten, I know what it means to live a balanced life,” she said.
Top early childhood programs such as Saint Andrew’s School achieve success by combining best practices into one unique model. From the attention to the prepared environment, focus on social-emotional health, targeting of literacy development, use of the Two-Teacher Model, and spot-lighting of visible learning - there’s so much that makes the early years for a child special at SA.

Picture this! As a kindergartener writes in her journal, she pauses to look at the Word Wall, a reference tool for commonly used words such as “the”, “and”, and “look.” Peek into all Pre-K and K classrooms and see students constructing knowledge at their own pace in similar ways, guided and facilitated by teacher modeling and direction.
As the kindergartener writes in her journal, the teacher keenly observes the student’s thinking moves. This kindergarten teacher uses her adept management of that independent journaling task to know exactly how to target the next learning experience.
Children in Pre-K and Kindergarten are spending their time thinking, talking, reading, writing, and listening, engaged in routines like “Morning Meeting” and classroom jobs. Tasks such as these are authentic and worthwhile - each having learning value, rather than just keeping students busy.
But what sets Saint Andrew’s Early Childhood experience apart from other preschool and kindergarten programs is eloquently captured in the words of a longtime Scots parent.
Dawn Weisz, parent of Bria ‘19 and Ella ‘23, is a member of the Friends of the Arts (FOA) parents association and proud parent of two “lifers.” Lifers are students who have been at Saint Andrew’s School since Pre-K or Kindergarten.
“My daughter Bria has been here for 13 years...and in that time, it has become so much more than a school. It is our home,” said Weisz. At the beginning of Bria’s senior year, she was named a National Merit Semifinalist, competing and triumphing against 1.6 million juniors in more than 22,000 high schools across the country for highest marks on the PSATs.
With pride in Bria’s academic accomplishments, Weisz pauses to note a moment her daughter experienced at the Annual Honor Pinning Ceremony in September, where lifers gathered in front of the whole school to “pin” newest four and five year old Scots. “That moment, when Bria pinned the Pre-K and Kindergarten students, completed a special circle for her as an honored member of the Saint Andrew’s community. It was such an amazing moment.”
When asked what makes Saint Andrew’s Pre-K and Kindergarten a step above the rest, Weisz pointed to how the community rises by lifting all, rather than only a few. “This is a school that curates all talents and brings out the best in every student,” she said. “The Saint Andrew’s difference is that my children and all children, starting when they are four and five years old, find their own paths to success, not at the expense of the next child.”
Weisz’s words ring true to all who celebrate the early childhood experiences of Saint Andrew’s students. “Saint Andrew’s builds up every child, starting in Pre-K and Kindergarten, and in doing so, we all become a stronger Scots community.” 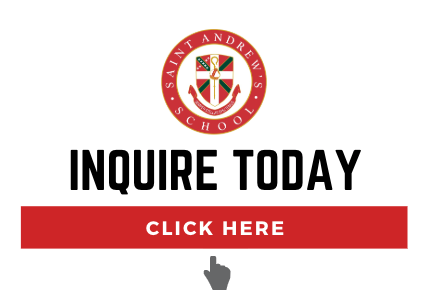 A non-profit, independent, co-educational school for grades Pre-K - 12, Saint Andrew's School is a private day and boarding school located in Boca Raton, educating the best students from across Palm Beach County, Florida, the United States, and throughout the world in the Episcopal tradition.